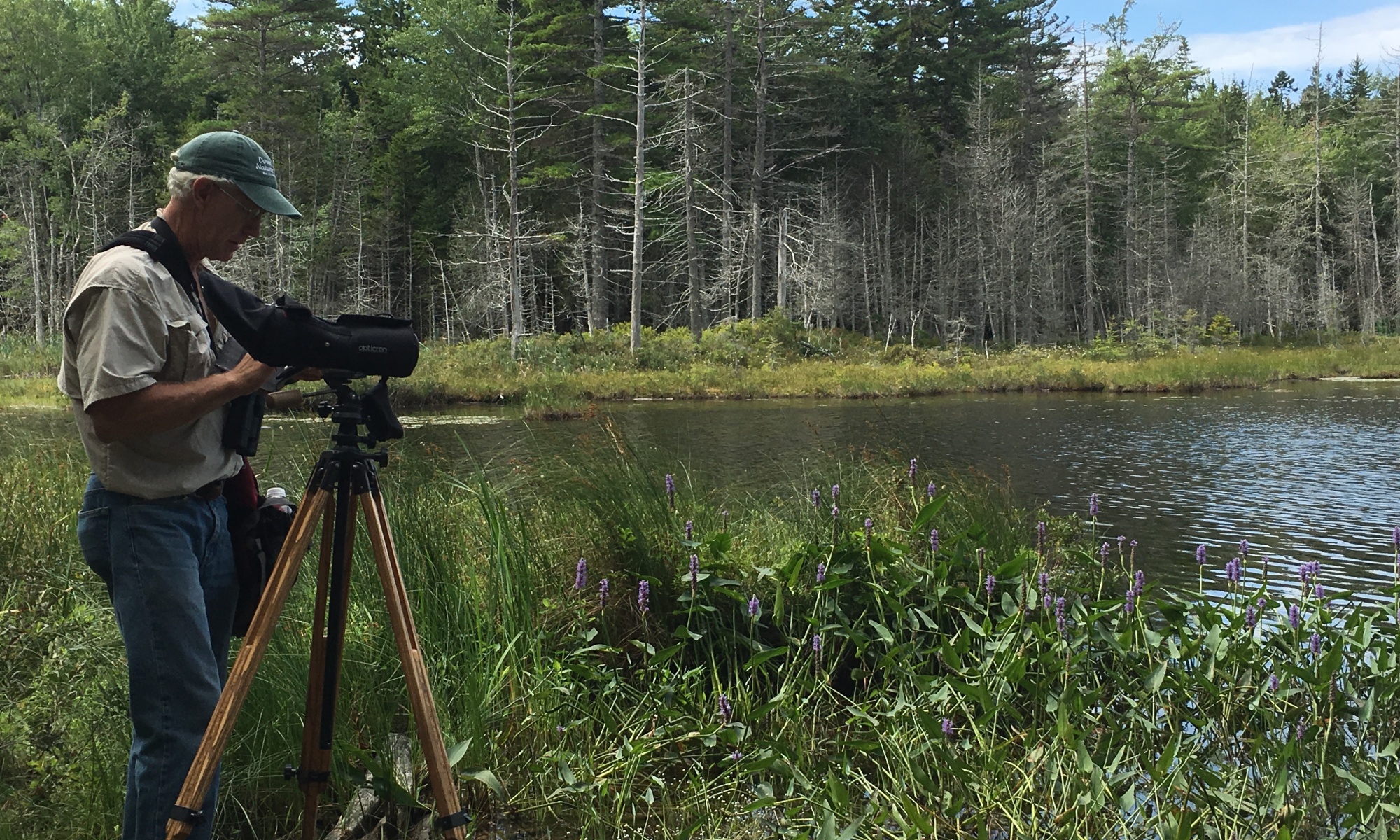 During a recent trip to Down East Maine, birdwatching per se was not top of mind. I set out to experience and get in tune with the natural splendor of the of the place,  Acadia National Park in particular.

As so often happens, the most enlightening travel experiences come from unexpected quarters. My renewed appreciation of the region’s vast ecosystem came through birdwatching, with a pro, Michael Good, MS.

Oh, I recognize common “backyard” birds: brilliant male cardinals, squawky blue jays, blackbirds with flashy red trim (not a scientific term). I’ve got a bead on swans, geese, various ducks. In summer, I can spot a neon yellow finch, dazzling hummingbirds. Shorebirds, beyond majestic blue herons or elegant egrets, get lumped into one of two categories: “gulls” or “smaller-birds-that-live -at-the-beach.”

Beyond that, I am an ornithological black hole. But here’s what I learned….

Michael grounded this field trip in biology by sharing  the Latin name, gender and approximate age for each bird, and weaving the geography and biodiversity of Mt. Desert Island into the bird narrative.  His knowledge made it interesting; his passion made it fun.

My  main takeaway, to use an overwrought metaphor, is that birds can be the “canary in the coal mine” signaling the health of a region’s  in a range of habitats. In the course of 3 + hours in the field, at different locations ranging from forests to wetlands to tidal shorelines, we saw over 200 individual birds representing 38 species. Warblers to raptors, with ducks in between, each plays a role in the ecosystem.

Michael explained the  various watersheds, from fresh ponds through streams and marsh to tidal inlets;  he showed us fish ladders built to give eels and herring access to freshwater spawning grounds (and how they navigate salt-to-fresh habitats).

Birds add to Nature’s balancing act: they eat the remnants of bait fish, and keep rodents, bugs, and other pests (e.g. rabbits) under control in one big inter-dependent bio-web. Fascinating to see it up close.

Raptors are at the top of the avian pecking order

What’s a raptor, you say? Hawks, falcons, eagles and owls – raptors are at the top of the avian food chain. They are ferocious hunters, with weapon-grade characteristics: don’t- mess-with-me talons, strong hooked beaks and relatively big eyes that give them keen vision.  A Merlin – a small falcon – displayed all his raptor-ness for us, caught by Michael’s camera.

Renown for their dive-bombing tactics, raptors favor vertebrates and are not above snatching animal young from nests, fish from other birds (more on that), and small animals plucked neatly off the ground.

I expressed the hope of seeing a regal bald eagle and Michael delivered, as if on cue. Early on, an eagle landed in the distance, atop a tall oak, and just sat there defiantly. Michael’s powerful scope mounted on a tripod provided an excellent view.

Suddenly the inlet was all sound and fury: crows and gulls screeching, smaller birds pecking at the shore flew up and out. Michael explained that the gulls and crows had just sent out the “all alert” warning of the eagle’s presence and all species knew to relocate – STAT.

Historical anecdote: Benjamin Franklin apparently objected the bald eagle as the symbol of the newly-minted United States, on the grounds that it was too fierce and aggressive. As we know, he was overruled.

I learned a wonderful term from Michael, kleptoparasitism, as it applies to birds who use force and/or deception to secure food.  This practice is not unique to raptors as gulls, too, are guilty as charged.

The aggressors out-fly or otherwise harass their prey, forcing the victim to drop the food in-flight. They then swoop down and steal it away, leaving the poor ‘sucker’ to once again hunt on its own. It’s an interesting pyramid among raptors: ospreys will target birds they can steal from mid-flight, only to fall prey to more a more aggressive raptor up the food chain.

Some birds are known to work pairs in a devious alliance between acts of diversion and mid-air theft. It’s just like Bonnie and Clyde: Bonnie distracts the bank manager while Clyde nails the cash. They make off with the loot and are on their way. Birds, too.

Birdwatching allows, even forces, you to dial it down

The point of vacation, according to behaviorists and psychologists, is to rejuvenate mind, body, and soul from the grind of daily life. This can mean very different things to different people, but it should signal the opportunity to redirect our minds, refresh our spirits and connect… with nature, family, new experiences, whatever. But bottom line: turn off the devices, and dial it down!

Entering Nature’s avian kingdom is a privilege and the price of admission, not a high one, is leaving devices behind. It’s easier, in my opinion, to visit this world with a knowledgeable guide. I don’t know how many times I thought to myself, during my brief introduction to a naturalist’s world, “wow, didn’t know that.”  Reading the above gives you an idea of how much I didn’t know.

Simple fact: You are not as inclined to obsessively check email and stock prices (data usage be damned!)  if someone is engaging you on an entirely different intellectual and sensory level.

The importance of nature – and the attendant exercise – to our cognitive abilities, not to mention mental health, is grounded in research.

Sure, green space in urban areas counts, but I believe amplified by few hours of submission to a world increasingly foreign to us. You can wade in the baby pool or you can deep dive. Every once in a while, go for the dive.

James Bond was an ornithologist first, a spy second.

Michael shared this, clearly a favorite story: British author and spymaster Ian Fleming, an avid birder, was familiar with the work of American ornithologist James Bond, who wrote the definitive Caribbean field guide, Birds of the West Indies.  Fleming copped the name (with permission), and maybe a bit of the “look”  for his now ubiquitous spy series.

And so, with the publication of Casino Royale in 1952, the fictional James Bond was born. We all know what happened next.

Birding continued to play a role in Fleming’s Bond series: Dr. No features a bird sanctuary in the Bahamas; in the 2002 movie Die Another Day, the fictional Bond uses the ruse of an ornithologist with a close-up shot of Birds of the West Indies.

Take the time to unplug; take the time to look, feel and hear the natural world. I heartily recommend Michael’s guiding services, Down East Nature Tours.  You don’t even need your own binoculars.

And please share your ‘nature story’ – birding or otherwise, in the comments below.  What has inspired you, provided insight, or refreshed your soul?